5 Songs To Consider by... Sweet 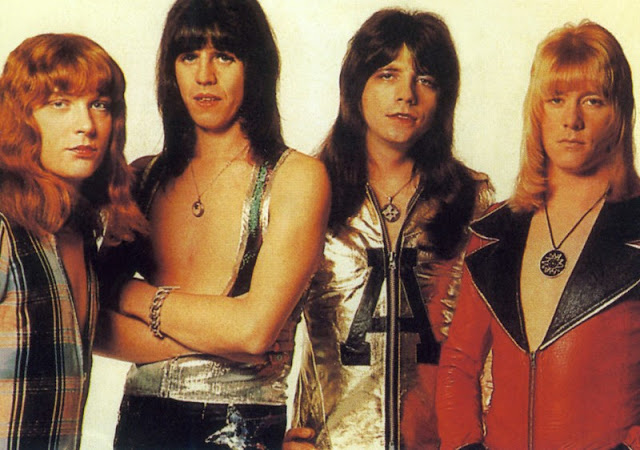 Guest blogger Mark Hetherington takes a look at one of his favourite bands.

The Sweet, if they are remembered at all today, are generally thought of as one of the giants of the British Glam Rock explosion of the early 1970s. Some people may remember their earlier bubble-gum pop sound but here are five songs that might make you think again about the Sweet, and what they might have been.

How It Started In A Nutshell

Sweet first started to come together when drummer Mick Tucker was playing for Wainwright’s Gentlemen. Singers Ian Gillan, of Deep Purple fame, and Anne Cully both left and were replaced by Scottish born Brian Connolly. With Mick Tucker on the verge of being sacked, he and Connolly left and started their own band, The Sweetshop and they recruited Steve Priest to play bass. An old bandmate of Tucker’s, Frank Torpey was brought in on guitar and they soon earned a following on the pub circuit. Realising there was another band called The Sweetshop, they shortened it to The Sweet and in 1973 it became simply Sweet. Before that though, Torpey left and was eventually replaced in 1970, by Andy Scott. Signing with management and song writing team Mike Chapman and Nicky Chinn, the band had a few minor hits such as ‘Funny Funny,’ ‘Co-Co’ and ‘Poppa Joe’ before beginning their run of Glam hits with Little Willy in 1972.
It should be noted that sadly there are very few recordings or videos of live performances by Sweet in their heyday and most of those are poor quality or lip-synched for TV as was the norm then. The videos linked to in this blog are therefore official promo clips or fan made videos using the studio recordings, apart from Burn on the Flame, which was taken from an un-broadcast performance for German TV.

The opener for the 1974 album ‘Sweet Fanny Adams’ is a full-on hard rocker. If more people had been paying attention this song could almost single-handedly have kickstarted the New Wave of British Heavy Metal. Written by Andy Scott, lyrically the song can be seen as a tale of domestic abuse, although one commentator describes it as ‘sexually charged’, but it could also been seen as a metaphor for the band breaking away from Chapman and Chinn’s management and song writing.

Allegedly inspired by an episode of ‘Star Trek’ (although I have been unable to discover which one) ‘Healer’ is something of an oddity. Very different to their more usual style, in fact it reminds me a little of some of the more experimental Led Zeppelin songs, it is still instantly recognisable as Sweet. A pseudo-mystical lyric over a pounding, hypnotic drum beat and somewhat funky guitars give way to a simple hard rock chorus. At almost 7 ½ minutes the song is one of the band’s longest but never outstays its welcome.

Inspired by experiences on tour in Chicago in 1976 this hard rock powerhouse is another of Sweet’s longer songs. With a killer riff, reminiscent of Deep Purple’s Woman From Tokyo, Windy City is definitely its own song, and any similarities are soon forgotten. The lyrics talk about the evils of money, both having too little and having too much, and the desire to be free of the need of it. A powerful instrument break midway through gives way to a more melodic albeit slightly sinister section before powering back into the ending.

An upbeat gentle love song, sung by its composer, guitarist Andy Scott. ‘Fountain’ starts with an acoustic guitar accompanying Scott, with the rest of the band joining in for harmonies in the chorus, before going into a killer electric slide guitar solo and adding a harpsichord which rounds off the song. Although the song was written and sung by Scott, it was bassist Steve Priest’s idea to add the harpsichord and in doing so really elevated the song.


Burn on the Flame

In the early days Chapman and Chinn wouldn’t let the band write their own songs. Eventually they relented and began to let them write first the ‘B’ sides to their singles and then album tracks before the band finally took control of their own output. Burn on the Flame was the band’s composition and the hard rocking ‘B’ side to ‘The Six Teens,’ the penultimate single written for the band by Chapman and Chinn. Lyrically it’s a simple love song, but at the same time it is a powerhouse rock song which even now, 48 years later, still has the audiences bouncing!

It's a strange thing that despite their undoubted success, Sweet never quite lived up to their full potential. Their management’s insistence on top 40 single success meant that their albums, with the band’s own compositions weren’t given the attention they deserved. The music press saw them as just another teeny bopper band and didn’t take them their albums seriously and an incident which saw singer Brian Connolly being kicked in the throat meant they couldn’t play a stadium gig which Pete Townshend of the Who had personally invited them to. This incident also Connolly losing some of his vocal range, resulting in a loss of confidence and turning to alcohol. Sweet’s first album was a collection of the more poppy songs such as Coco and Poppa Joe but the band’s next three were more statements of what they wanted to be and are stone cold classics. However, when those weren’t received as had been hoped, they tried a wider variety of tunes and ended up watering down their rock band leanings and while the later albums all have something worth listening to on them, they were never as good as on ‘Desolation Boulevard,’ ‘Sweet Fanny Adams’ (both 1974) and ‘Give Us a Wink’ (1976).

Rory Gallagher Top 30 - As Picked By His Fans

Orphans Of The Ash: Ellipsis – Review and Interview