5 Songs To Consider By: Elvis Presley 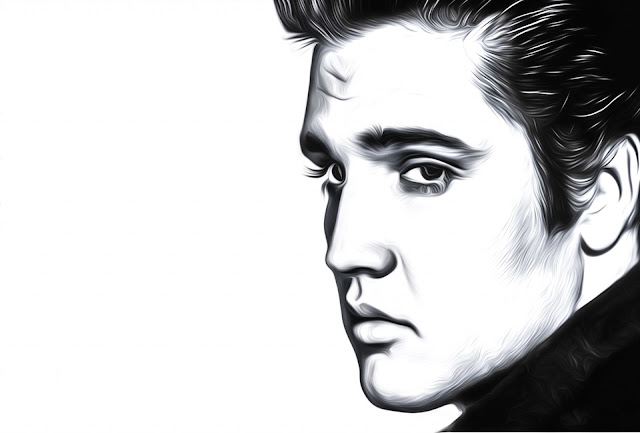 Public Domain
Elvis Presley is without a doubt one of the most famous men to have ever lived. However, he is also clouded by a lot of myth. And extremely cheesy impersonators who, let's be honest, don’t do the man any favours in many cases. When it comes to Elvis, you really can’t beat the original.
Born in Tupelo, Mississippi on 8 January 1935, Elvis moved to Memphis, Tennessee at the age of 13. He had an immensely successful career over two decades before his premature death age 42 on the 16th of August 1977, becoming the most successful male solo artist of all time, taking in rock n roll, gospel, country, rockabilly and pop with his three-octave voice and incredible stage presence. John Lennon said, “Before Elvis there was nothing.” Well, that may do a disservice to the blues, country and gospel that inspired Elvis and his peers in the early days of rock n roll, but it does go to show the impact the man had when he hit the airways.

Released as a single on 27 January 1956, having been recorded only 17 days previously, this was Elvis’ first single with RCA Victor, which had bought out Elvis’ contract with Sun Records for $35,000. It may seem unbelievable today, but the song wasn’t well regarded by personnel around Elvis. Sam Phillips, the owner of Sun Records, described it as ‘a morbid mess,’ while at RCA, it was viewed as a ‘terrible choice of song’, with one executive going so far to say, ‘We certainly can’t release that one!’ Lyrically, it is quite a gloomy song. There is what appears to be an urban legend that the composers of the song were inspired by a news article in the Miami Herald about the suicide of a man at a hotel, leaving a note saying, “I walk a lonely road.” Heartbreak Hotel was co-written by Tommy Durden and Mae Boren Axton. Elvis was offered one third of the songwriting royalties for singing it and gained a composer credit. The UK press was just as dour as the label executives when the single was released, but the naysayers were forced to eat their words when the song became a mega hit, in turn inspiring many young kids who then went onto be rock legends in their own right, such as the aforementioned John Lennon, his fellow Beatle George Harrison, who heard it wafting down a street as he cycled by, and Robert Plant, who was left stunned by it as an eight-year-old.

Written by blues singer Junior Parker, who released it as a single in 1953 on Sun Records. It was recorded by Elvis at Sun Records in 1955 and released as a B-side to I Forgot To Remember To Forget in August 1955, with a subsequent re-release by RCA Victor in November that year after acquiring Elvis’ Sun Records contract. It became a popular rockabilly song and was ranked at no. 77 in the 500 Greatest Songs Of All Time by Rolling Stone magazine. Later on, Robbie Robertson of The Band wrote extra lyrics for the song with Sam Phillips’ approval.

Released as a single in September 1958, King Creole was composed by Lieber and Stroller, the legendary rock n roll songwriting team. The song is about a Creole guitar virtuoso, able to turn his hand to any style. The song also shares its title with the 1958 Michael Curtiz directed film in which Elvis took the lead role of Danny Fisher. The film, based on the Harold Robbins novel, A Stone For Danny Fisher, was originally slated to have James Dean in the lead, but unfortunately he was killed in his infamous car wreck. Elvis, who happened to be a massive James Dean fan, took the role instead. He was so keen on the role, he memorised the entire film script, including everyone else’s lines as well as his own. He also shaved his sideburns and lost 15 lbs in weight at the director’s request. There was also a change to the novel’s plot, which resulted in Danny become a singer in the film rather than the boxer he was in the book. The film was a massive hit, and in one showing, the audience rioted at the cinema, causing all sorts of mayhem. Elvis said it was his favourite out of all the film roles he had.

If I Can Dream

Another song was needed for the end of Elvis’ 1968 Comeback Special, and the job was given to Billy Goldberg and Earl Brown. The NBC Elvis special, as it was then known, was filmed between 20 and 28 June 1968, not long after the assassination of Martin Luther King jr. Elvis had a deep admiration for King and often recited the Civil Rights leader’s “I Have A Dream” speech. With this in mind, Goldberg and Brown got to work. And the result was dynamite. “I'm never going to sing another song I don't believe in. I'm never going to make another movie I don't believe in.” That was Elvis’ response after hearing the demo of If I Can Dream. His manager, the notorious ‘Colonel’ Tom Parker had other ideas, “That ain’t Elvis’ kind of song.” “Let me give it a shot, man,” Elvis protested. Moral of the story is perhaps listen to Elvis because he knocked it out of the park with this one. During the recording, Elvis’ backing singers had tears in their eyes, one commenting to Earl Brown that they hadn’t seen Elvis sing with such emotion before. How much the song meant to him is evident in his performance on the Comeback Special, with his own eyes brimming with tears. As a man from Mississippi, and later, Tennessee, Elvis would no doubt have been familiar with the cruelty of Jim Crow in the Deep South. The song says it all.

Recorded in February 1969 at the American Sound Studio in Memphis, Kentucky Rain wasn’t released until almost a year later in January 1970, reaching no. 16 in the Billboard charts. One of Elvis’ greats, it doesn’t appear to get the same attention as some of his other work, though it has appeared on several compilations, including the 2016 Elvis With The Royal Philharmonic Orchestra: The Wonder Of You. This haunting song, with yearning vocals definitely deserves more focus than what it gets. Written by Eddie Rabbit and Dick Heard, the song even got Elvis an in-studio cheerleader in the form of producer Chips Moman, who cheered him on with each successive take to encourage his performance.
Thanks to Colin Steel for input with King Creole
1950s 1960s 1970s 5 Songs blues Civil Rights Country Elvis Presley History Legends Memphis Rock n Roll USA Utter Legend

Rory Gallagher Top 30 - As Picked By His Fans

Any Road: The Magic Of George Harrison